The Audi E-Tron SUV and Sportback were among the first fully electric SUVs of their kind. Now they’re changing with the landscape—and it’s for the better.

Just a week ago we were able to drive some of the revamped model line, renamed the 2024 Audi Q8 E-Tron SUV and Sportback, with a fitting backdrop: one of the newest, most dynamic landscapes in the world, at Lanzarote, known as an island of volcanoes.

When the E-Tron SUV arrived in spring 2019, there was no direct rival—with the quirky Tesla Model X and the much smaller Jaguar I-Pace the closest alternatives. Now with an expected range of around 300 miles, the revamped Q8 E-Tron sits as a sensible mid-market entry, flanked by the BMW iX, Cadillac Lyriq, Mercedes EQS SUV, and Rivian R1S.

Like both its predecessor and the smaller Q4 E-Tron lineup, the Q8 E-Tron is offered in two body styles: SUV and Sportback. Both are identical ahead of the front seats, but the Sportback has a tapered, coupe-like roofline that limits rear-seat space and cargo in favor of a design that stands apart from other SUVs. 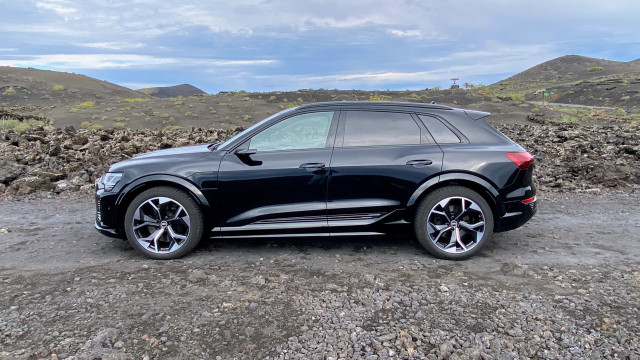 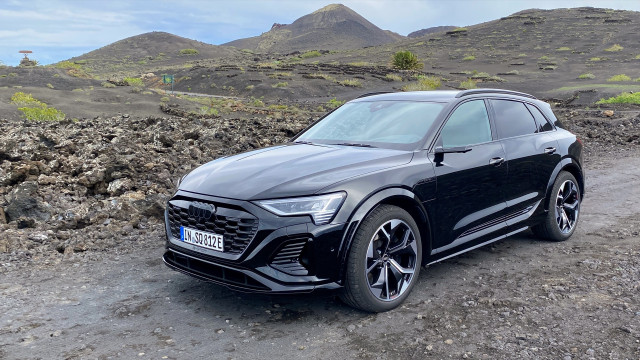 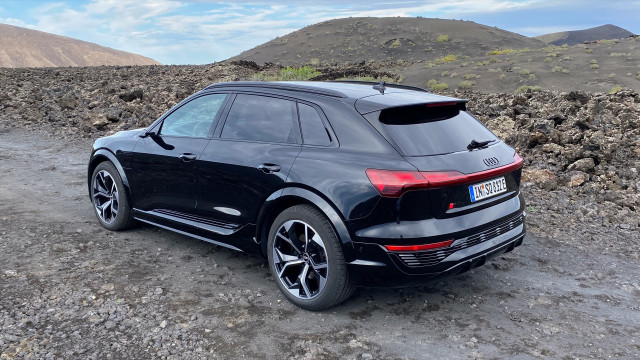 Audi shows a strong self-awareness of the E-Tron models’ strengths and weaknesses in how it went about improving them for a mid-cycle refresh. The accommodations, cabin comfort, and interface largely remain the same, but Audi put the bulk of the effort into one thing: boosting the Q8 E-Tron’s range.

The range addresses something Audi executives—especially those on the U.S. side—have freely admitted since around the time of the E-Tron’s launch. The Q8 E-Tron gets a bigger capacity pack—now at 114 kwh, versus the previous 95 kwh—resulting in 106 kwh of usable capacity. The overall battery box is the same size, but Audi has fit more of the same-size prismatic cells into it than before. Audi also shifted to a new nickel cobalt aluminum (NCA) cell chemistry.

With the battery pack offering 23% more usable energy than before, Audi sees a range boost of 30% or better in the Q8 E-Tron versus the old E-Tron. That’s partly because Audi has made some significant improvements to aerodynamics, adding active grille shutters and revisiting the underbody aero, most notably with an underbody spoiler that guides airflow around the wheels. These changes reduced the drag coefficient by 0.02, resulting in U.S.-spec coefficients of 0.27 for the Sportback and 0.29 for the SUV. 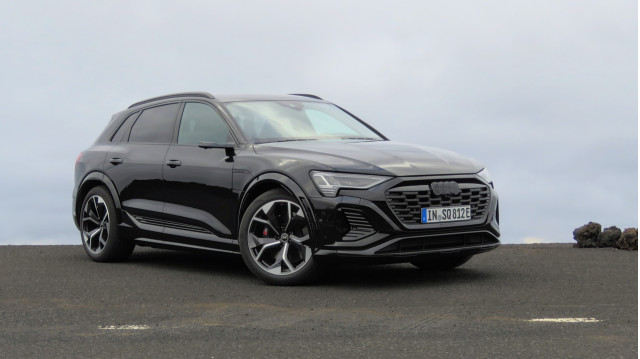 This does yield improvement, comparing my observations here versus my other drives of the E-Tron family. The venue Audi chose provided very mild temps and no significant elevation gain, so it wasn’t any serious test of the Q8 E-Tron’s driving range. The least efficient model of the lineup, the SQ8, managed 2.5 miles per kwh, according to the trip computer, over about 85 miles zigzagging the volcanic island—much of it keeping to around 45 mph or less, but with a few blasts to higher speed. Then in a much shorter drive, the Q8 S-line managed to match that figure.

That’s definitely an improvement in efficiency versus what I’ve seen in similar gentle conditions with the outgoing model, and at around 265 miles multiplied out, it suggests a real-world range improvement of at least 25%.

Q8 E-Tron: Friskier, but not faster-accelerating

I’ve driven the dual-motor E-Tron SUV and Sportback models extensively in the past, and the first change I noticed on the Q8 E-Tron models were that they handle more crisply on the slow but tightly curved island roads. They’re friskier than their predecessors. To yield that impression in the latest iteration, Audi switched out the steering rack for one with a quicker ratio (14.6:1 in the Q8 E-Tron versus 15.8:1 in the old E-Tron). Audi also employed a stiffer front axle control arm, and new bushings helped it accomplish making those quick directional changes without adding harshness.

As with the outgoing 2023 E-Tron, there are no standard-spring versions of this electric SUV lineup; all versions come with an adaptive air suspension, allowing 3.0 inches of body-height adjustment. Audi has also revised the tuning governing the Q8 E-Tron’s steering, suspension, and ride height, as well as torque distribution. The Q8 E-Tron offers five core modes: offroad, allroad, efficiency, comfort, and auto. They truly take advantage of this vehicle’s ride-height flexibilities and traction versatility. 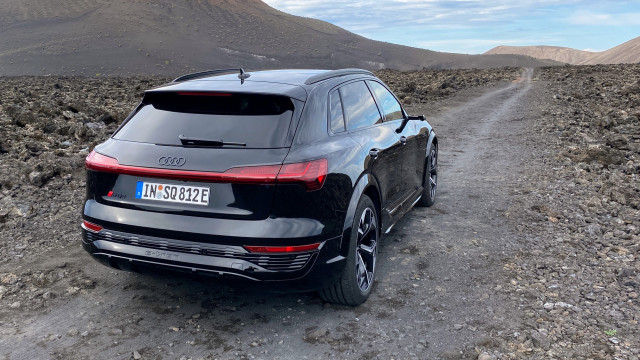 The system in both versions still defaults to rear-wheel drive under light cruising conditions, although it will now more quickly direct power to the front motor and front wheels when needed.

All Q8 E-Tron models have all-wheel drive. The Q8 E-Tron Advanced and S-line models have a dual-motor setup, while S models, badged SQ8, get a three-motor setup with two motors at the rear that allow physics-defying handling by providing braking action at the inside rear wheel while continuing to apply forward power at the outside.

The more densely stocked battery weighs about 44 pounds more than the previous 95-kwh pack, but a 15-pound drop in the weight of underbody shielding plus several other items nearly offset that, Audi says. With drive ratios the same, too, Audi says that it can get to 62 mph in numbers that are identical to 2022: 4.5 seconds for the SQ8, while the U.S. Q8 55 model will land at about 5.6 seconds. 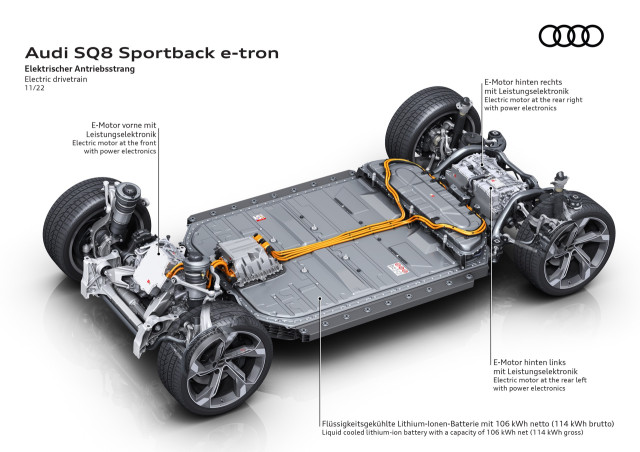 Front and rear, all versions of the E-Tron get asynchronous (induction) motors, but regardless of the version, the motors that are installed at the rear axle now get 14 windings rather than 12. That allows the motor to make light-load torque with less energy than before—an essential for “gliding.”

Off-the-line torque has never been a strength of these motors compared to rival permanent-magnet units, but Audi says that they provide better efficiency at high speed and cut the dependence on rare-earth materials. While the SQ8 doesn’t provide the standing-start rip that some EVs do, it enthusiastically surges forward from a rolling start on up, with an instantaneous, almost video-game quality about it—and surprisingly little lift-and-squat body motion compared to other large electric SUVs.

The vehicle’s interface doesn’t change much either. There’s still a very light level of recuperation when you lift off the accelerator, and the steering-wheel paddles offer three regen modes—the upper-most simulating gliding.

An Auto setting for regen is the default mode, and once you get to know how and why it’s ramping up regen in some situations—mostly for map data, but also when you’re following another vehicle—it’s a great driving companion, as it enables a smooth, no-drama kind of one-pedal driving (leaving the stops up to you, of course). 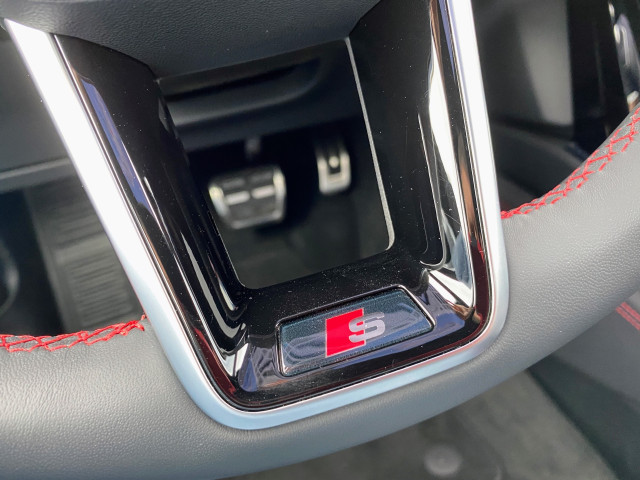 Audi hasn’t been a believer in the kind of intense one-pedal driving offered up by other EVs, and sees it as being a negative for efficiency and range in most cases. Unlike Tesla or Lucid, which don’t dial any additional regen into the brake pedal, and unlike most other EVs that physically blend in the brake pads, the E-Tron uses a braking system that does all of its braking of 0.3g or less with the motor/generators, transitioning to the brake pads only for stronger braking or for the last few inches of a stop.

In real-world driving—the kind of driving in which you’re creeping ahead at a stop, for instance, or creeping behind timid rental-car drivers on the island—the E-Tron’s brake-pedal feel is superb, and the system results in a precision at stoplights and in parking that’s absent from some other EVs. That certainly includes luxury rivals such as the Mercedes EQS SUV and BMW iX. Further, Audi boasts that it recovers more energy than those that physically blend in the brake pads.

Charging that makes the range easier to tap into

Despite the larger battery pack, it may take less time to pack in more miles at roadside charging stops. There were no opportunities to DC fast-charge the Q8 E-Tron along the way, but Audi has emphasized that it’s managed to boost the charge curve where it counts. The charge peak has been lifted from an official 150 kw (or 155 kw unofficially), to 170 kw, and it occurs around 60% state of charge—where road-trippers are bound to notice. That means even with the bigger battery pack, it can get from a 10-80% charge in as little as 31 minutes. Otherwise, the Q8 E-Tron comes with an 11-kw onboard charger—enough to get a full charge in less than 10 hours on a 240-volt power source. 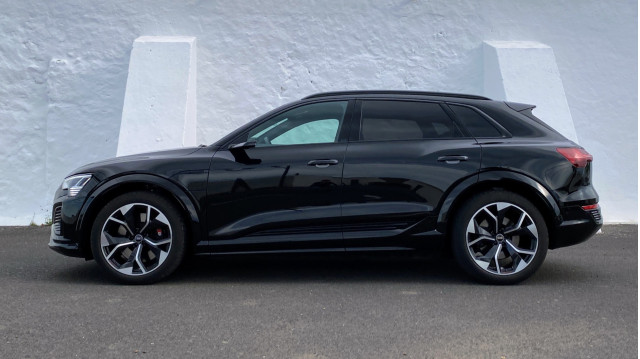 Those matters of range, charging, and steering aside, there’s surprisingly little to distinguish the Q8 E-Tron from the outgoing E-Tron. There’s been an effort to align the upper- and lower-body trim pieces so that the whole vehicle looks better coordinated than before. A new Audi logo adorns the grille and appears a bit smaller than before. The SQ8 gets a little more brightwork on the outside than either the Advanced or S-Line models, but with a full menu of trim options, you can pretty much have it your way.

The cabin was already an E-Tron strength, and Audi’s pretty much left it alone—with some refreshed materials. There’s a new lighter walnut wood trim on the menu, and synthetic leather seats with recycled microfibers for the S-Line. Just as before, the Q8 E-Tron feels like a true luxury vehicle in the way it hushes out road and wind noise; offers supportive, comfortable seating for adults all around; and provides sturdy, intuitive switches, most of which is satisfying to use.

A dual-screen central layout features a 10.1-inch touchscreen for communications, entertainment, and navigation up top and an 8.6-inch haptic display below dedicated mostly to climate controls. The instrument display shows lots of versatility if you use the steering-wheel toggles, and a head-up display is available. Audi continues to seek U.S. authorization for its virtual (camera-based) exterior mirrors, so for now we get physical mirrors. 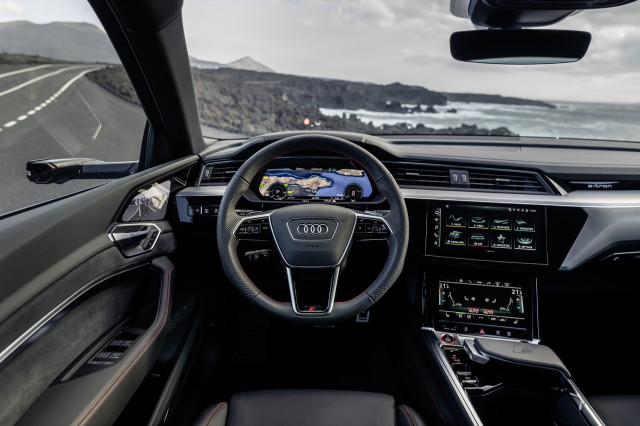 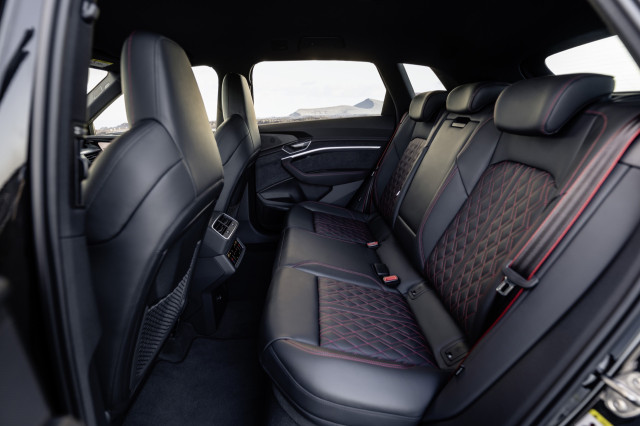 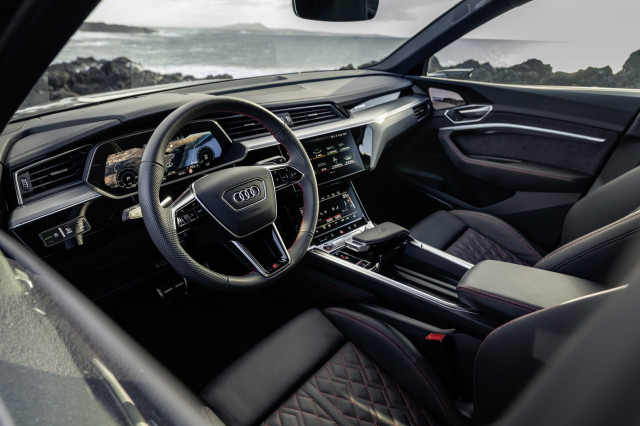 That very much places the friskier, farther-driving E-Tron in the middle of today’s luxury electric-SUV landscape—one that’s going to keep changing rapidly, just like those volcanic lands.

Internet Brands Automotive accepted travel to a far-flung island, plus meals and accommodation, to bring you this drive report.

How the Super Bowl is honoring women

How the Super Bowl is honoring women

Newborn and toddler saved from rubble in quake-hit …

Man convicted of murder for second time after retrial

Portland pizzeria named one of the best in the U.S.

State treasurer wants more people to use the Oregon …

Newborn and toddler saved from rubble in quake-hit …

The five biggest moments from Biden’s State of the …

Man convicted of murder for second time after retrial

Man jailed in Dallas monkey case says he’d do it …

Portland pizzeria named one of the best in the U.S.